We’ve been really impressed by the number and quality of new Irish Whiskeys hitting the marketplace. We’re big fans of the stuff here at Bottles, and it’s a special day when we’re able to add new offerings to our shelves.
If you’re new to the spirit, read our 101-style dive into the various styles of Irish Whiskey. Then, read on below to learn about the three new standouts that we’ve selected for the store.

The Sexton Irish Whiskey
Made from 100% Irish Malted Barley, The Sexton is triple distilled in copper pot stills and aged in casks formerly used to aged Oloroso sherry. It has a balance of rich, dried fruits and subtle oak notes with a smooth finish. Die-hards say the only way to enjoy it is straight. For the rest of us, The Sexton’s smooth and rich finish makes it an intriguing replacement for bourbon in a Manhattan.
On sale thru 3/31:
$24.99 (Compare to $29.99), 750ml 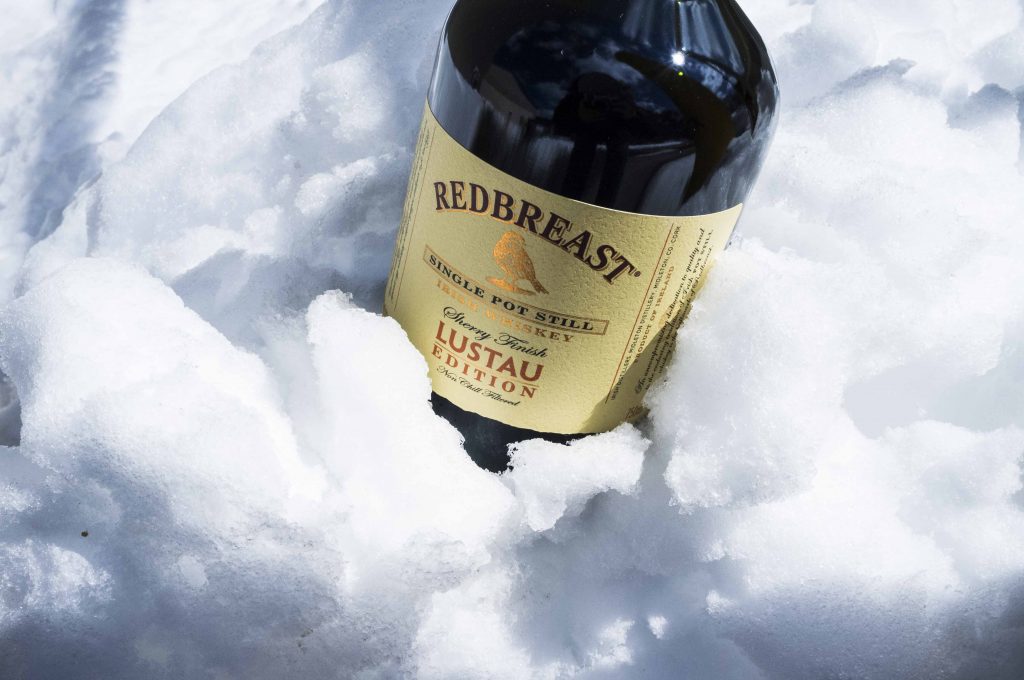 Redbreast Lustau Edition
This special treat spends between 9 and 12 years in bourbon and sherry casks before aging one additional year in Oloroso barrels. The result is one of the tastiest, sweet-finishing Irish offerings to come along in a while! This one won’t last!
$69.99, 750ml 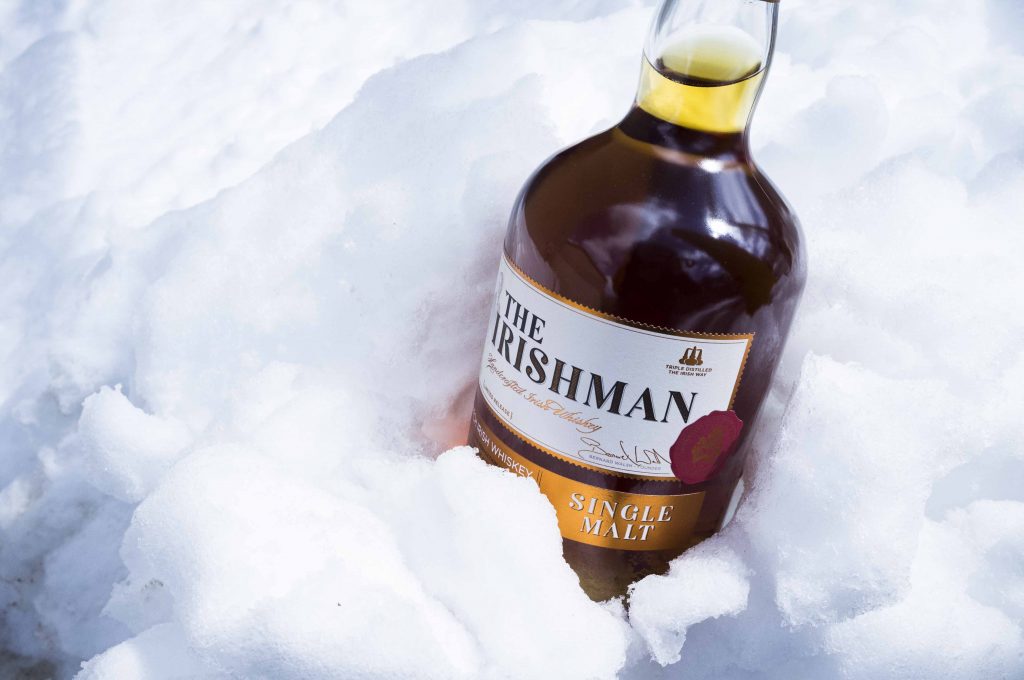 Irishman Single Malt
This is Josh’s personal choice for the holiday this year. (And Josh is a whiskey-loving  guy with strong Irish genes so we suggest listening to him.) It’s a well-developed and layered single malt that finishes with a pleasant, soft burn and drinks well beyond its price point.
$44.99, 750ml
Happy St. Patrick’s Day!
prices subject to change

We loved the Irish Whiskey-based cocktail that Lily created for us last week so much so we asked her to do another.

To complement the whiskey, Lily used a pantry staple – marmalade. The drink is sweet & tart, with wonderful aromatics from rosemary and a slightly bitter finish thanks to the addition of Montenegro amaro. It’s delightful anytime of the year, not just on St. Patty’s Day. 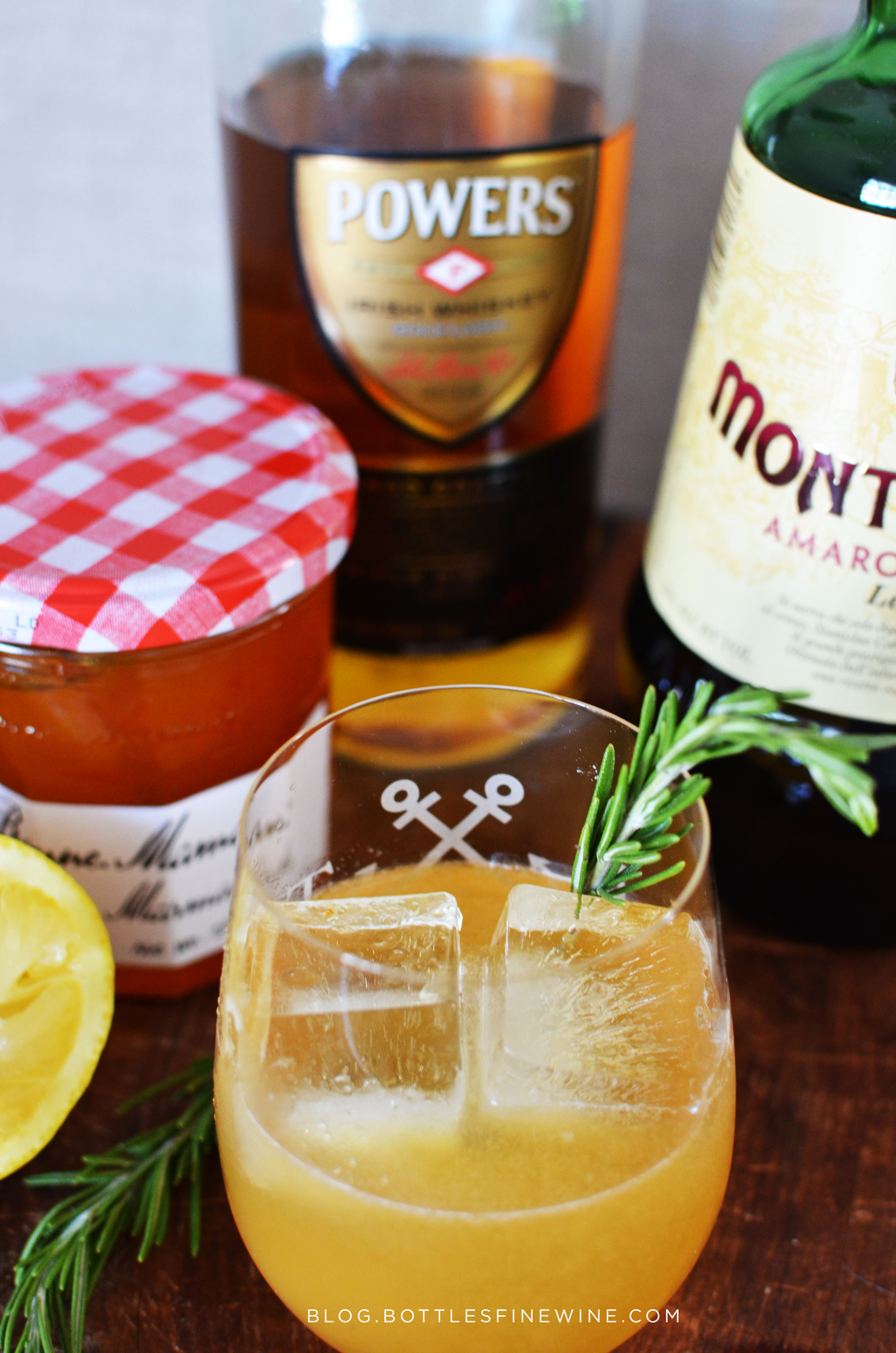 *For this recipe, orange marmalade was used but lemon grapefruit marmalade is also quite nice.

Place small sprig in shaker, add Montenegro and gently muddle once with a muddler or wooden spoon to release the rosemary flavor.
Add whiskey, lemon, and marmalade.
Fill shaker with ice and shake until frost forms on the outside of the tin.
Double-strain into a tumbler, garnish with remaining sprig of rosemary and ice.

Last week we presented 6 Irish Whiskeys that we think hold their own against the world’s best spirits. Today we share 3 additional very special bottles that are worth their weight in gold. (A good ole’ Irish pot-of-gold, that is.) 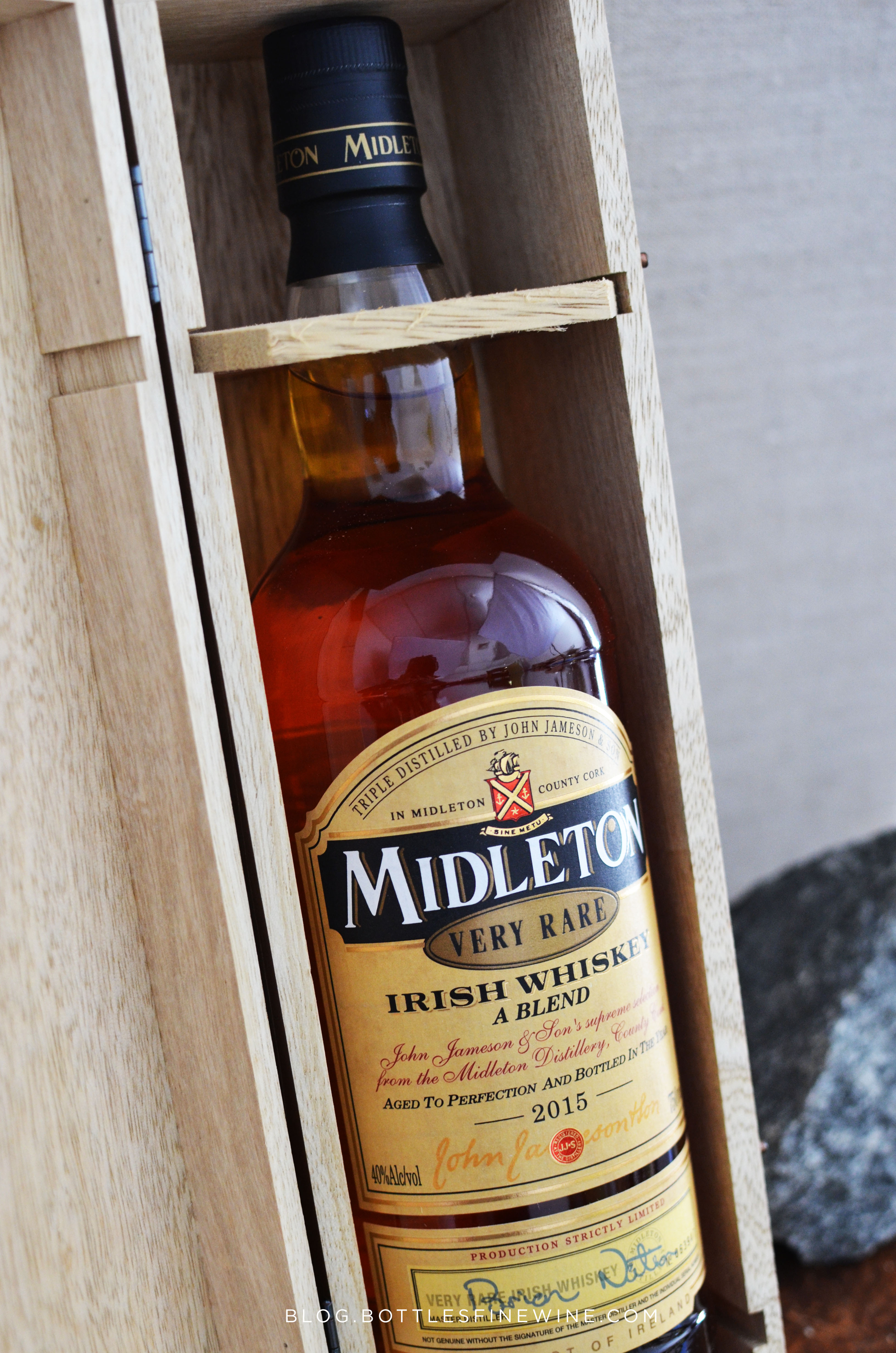 Midleton Very Rare
Created in 1984 and released annually since, this special bottling of hand selected Midleton whiskey has aromas of cane sugar, vanilla, milk chocolate and ripe green apples. It’s very soft and mellow, with a “confectionary” sweetness. The charred oak and barley lend a wonderful complexity on the finish. 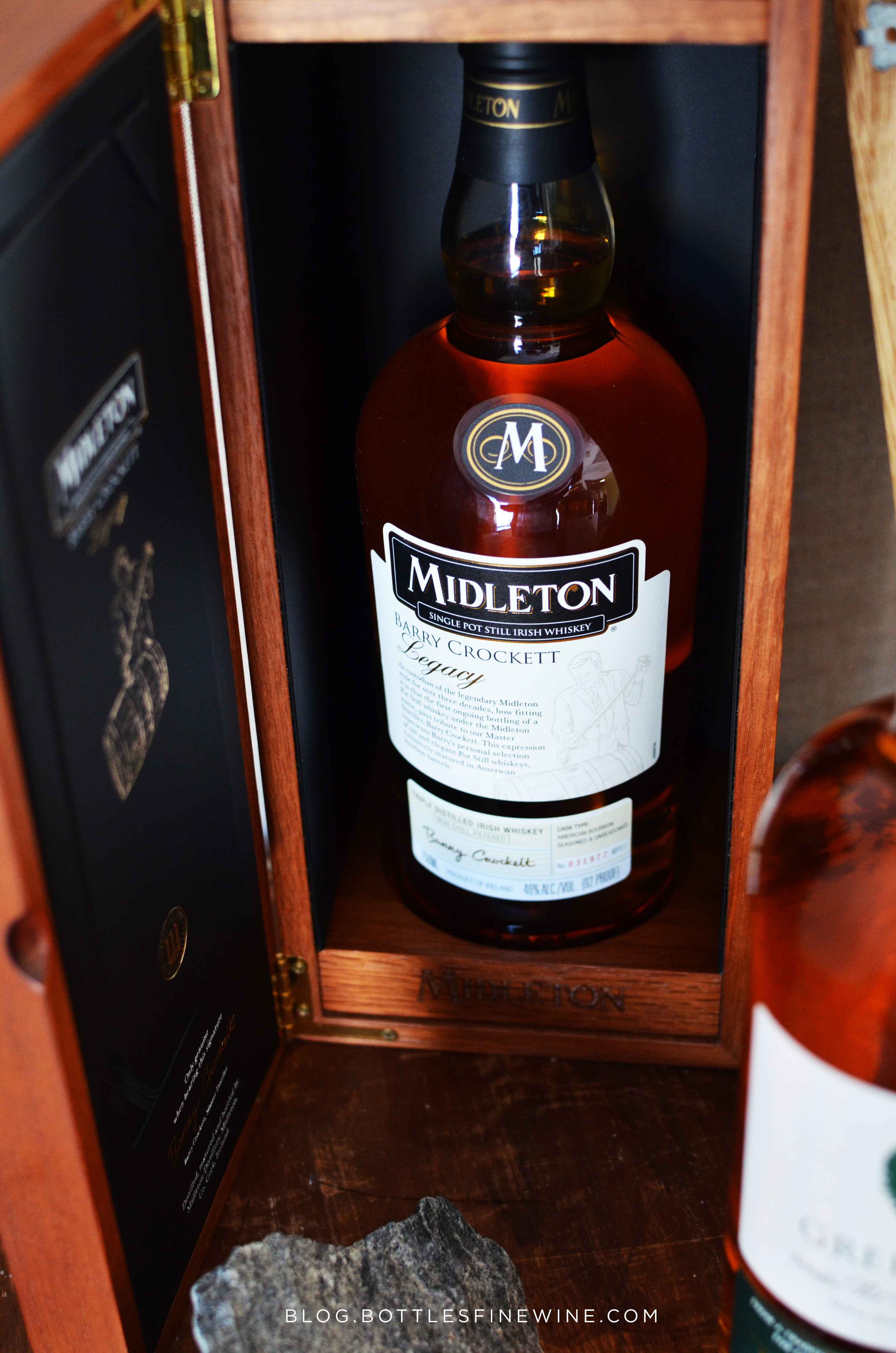 Midleton Barry Crockett Legacy
Named for Midleton’s Master Distiller, this bottle expresses his taste and is comprised of his personal selection of Single Pot Still whiskeys aged in bourbon barrels. It’s quite delicate, with notes of lime, pear, and sweet green pepper, and has flavors of vanilla, pepper, and citrus. It finishes with an oaky, mandarin orange sweetness. 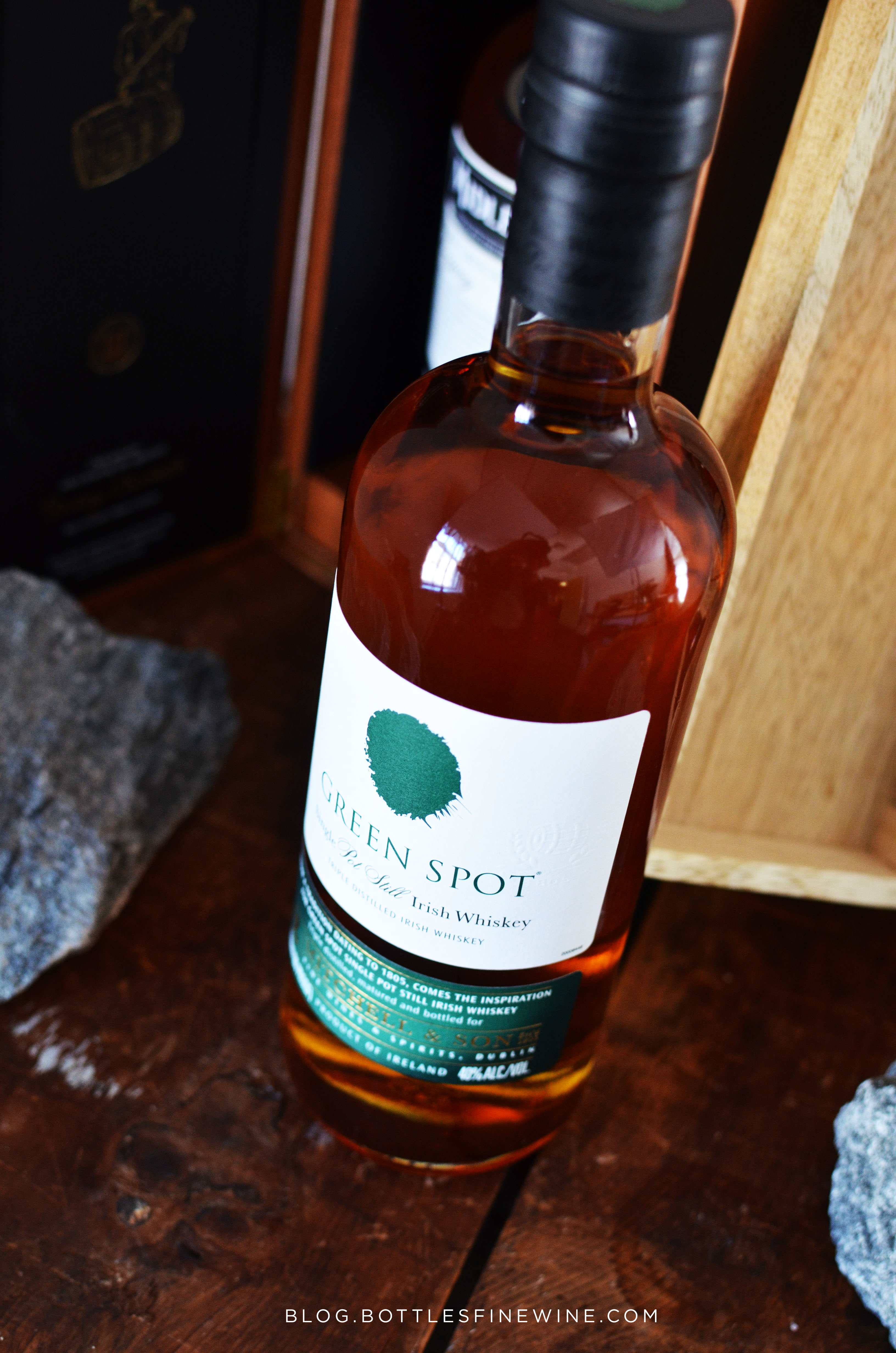 Greenspot
Only small quantities of this very special spirit are produced each year. It’s comprised of Pot Still Whiskeys aged between 7-10 years & matured in bourbon and sherry casks. It has aromas of spiced apples and pears and toasted wood; it’s full-flavored with spice, citrus, green apples and oak. It’s harder to find than a leprechaun, so be sure to grab it while you can!

Last week we gave you the who, what, where, when and hows of Irish Whiskey, and presented our case for why we believe many can stand up to many of the best bourbons and single malts on the market today. Here’s further proof. 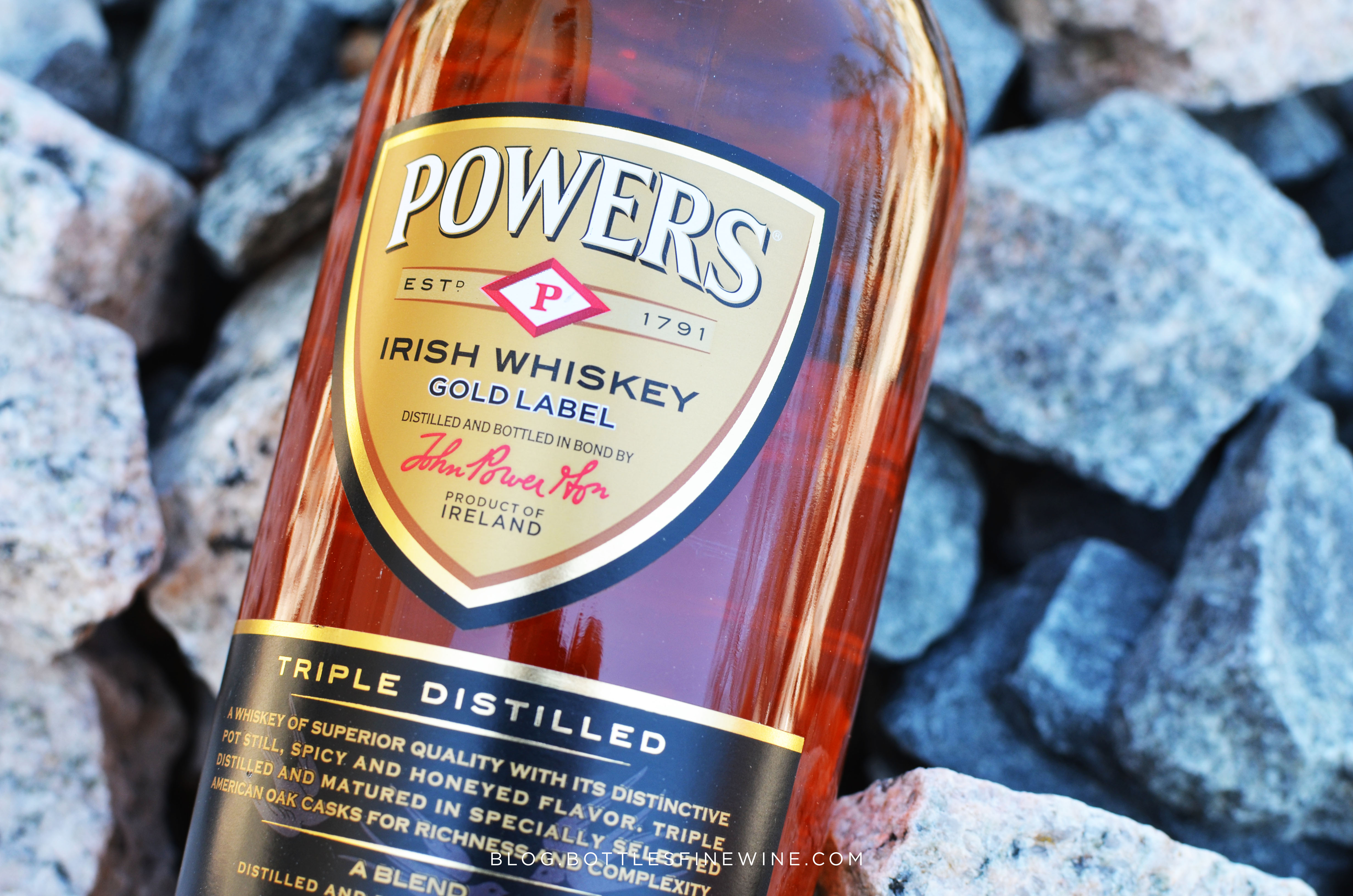 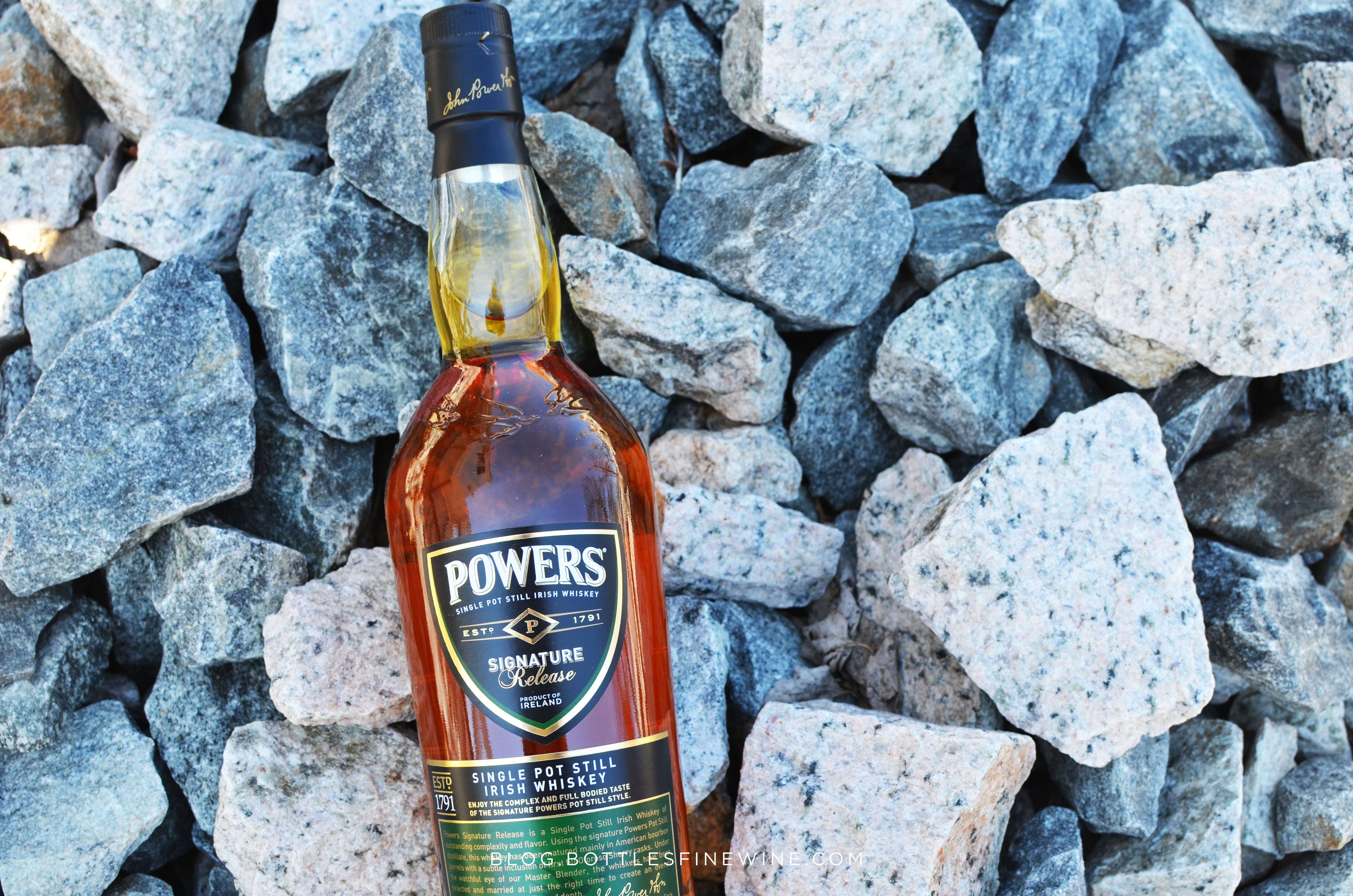 Powers Single Pot Still “Signature Release”
This “Signature Release” is intense, rich and complex thanks to its aging in American oak and first-fill Oloroso sherry casks. It’s redolent of herbs, nutmeg, figs and black pepper, and is round with flavors of vanilla, black licorice, fresh melon and green apple. 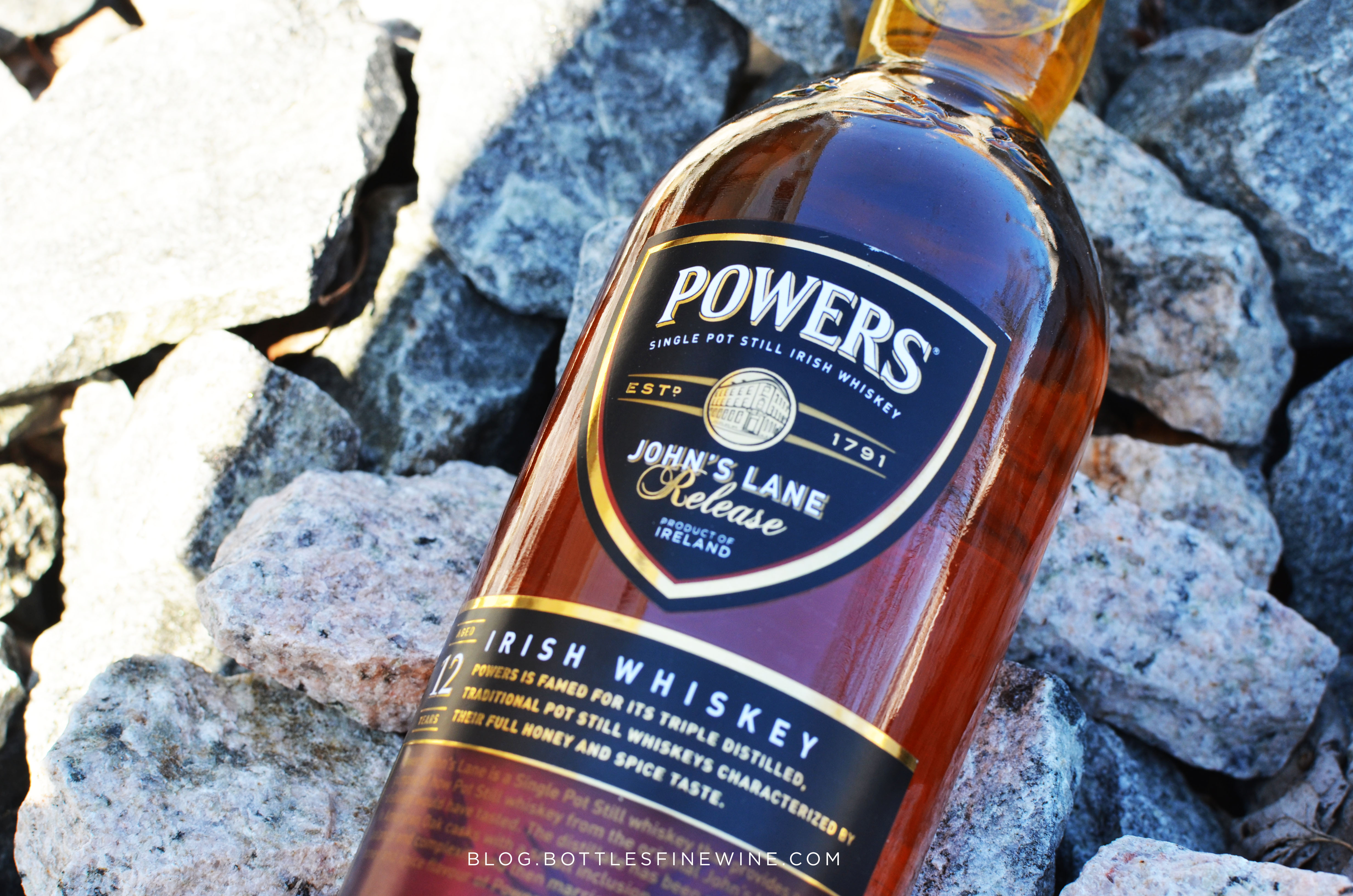 Powers John’s Lane
A special whiskey whose distillate is matured for no less than 12 years in American & Iberian oak. It’s earthy, with aromas of leather, tobacco, dark chocolate and toffee and is thick with full-bodied flavors of spice, vanilla, honey and dried apples. 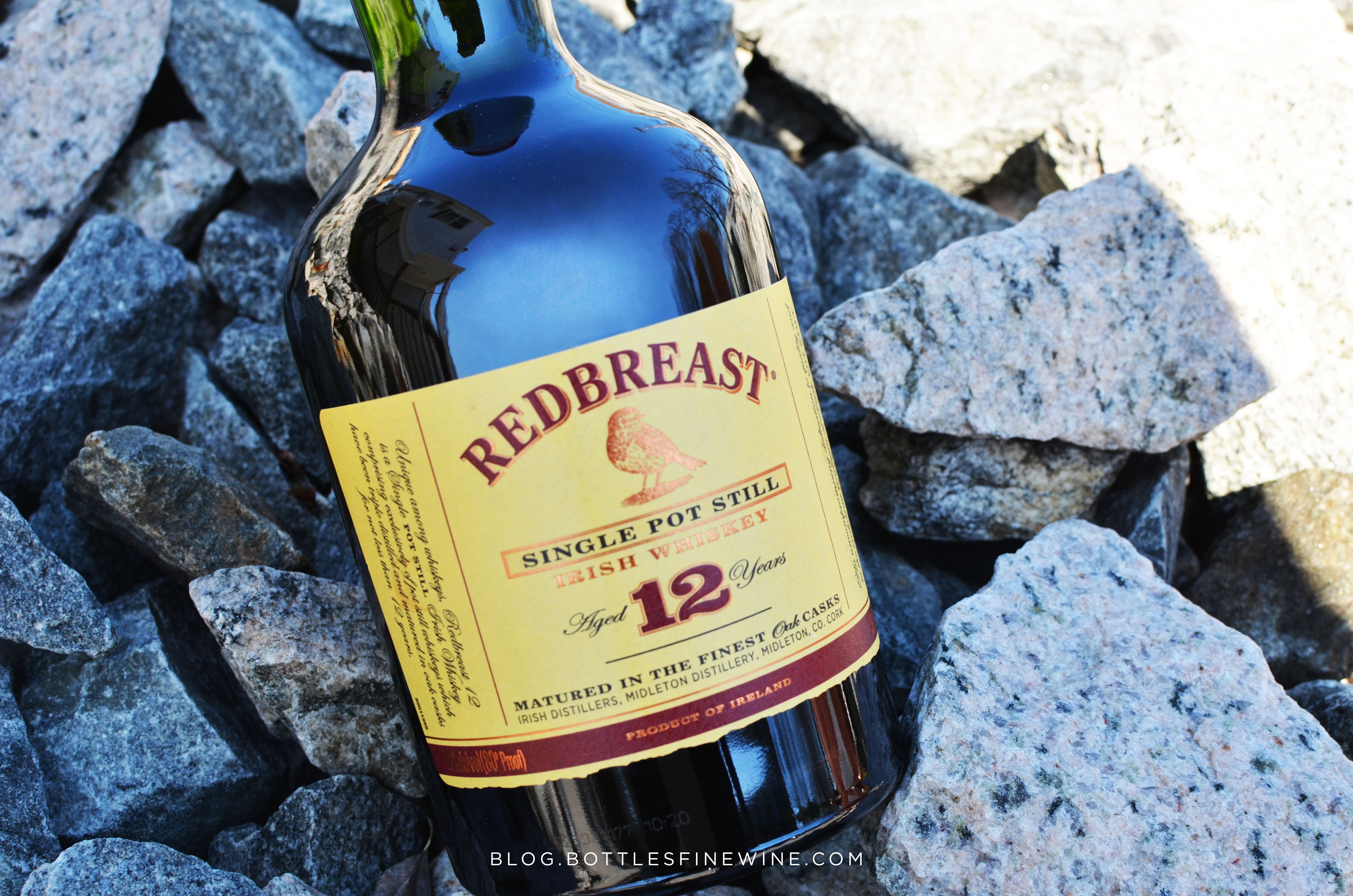 Redbreast 12-year
A favorite of whiskey lovers everywhere, the 12-year is getting harder and harder to come by, unfortunately. It garners its trademark full-bodied fruitcake character and robust flavor from the distillate, which is matured in Oloroso casks. 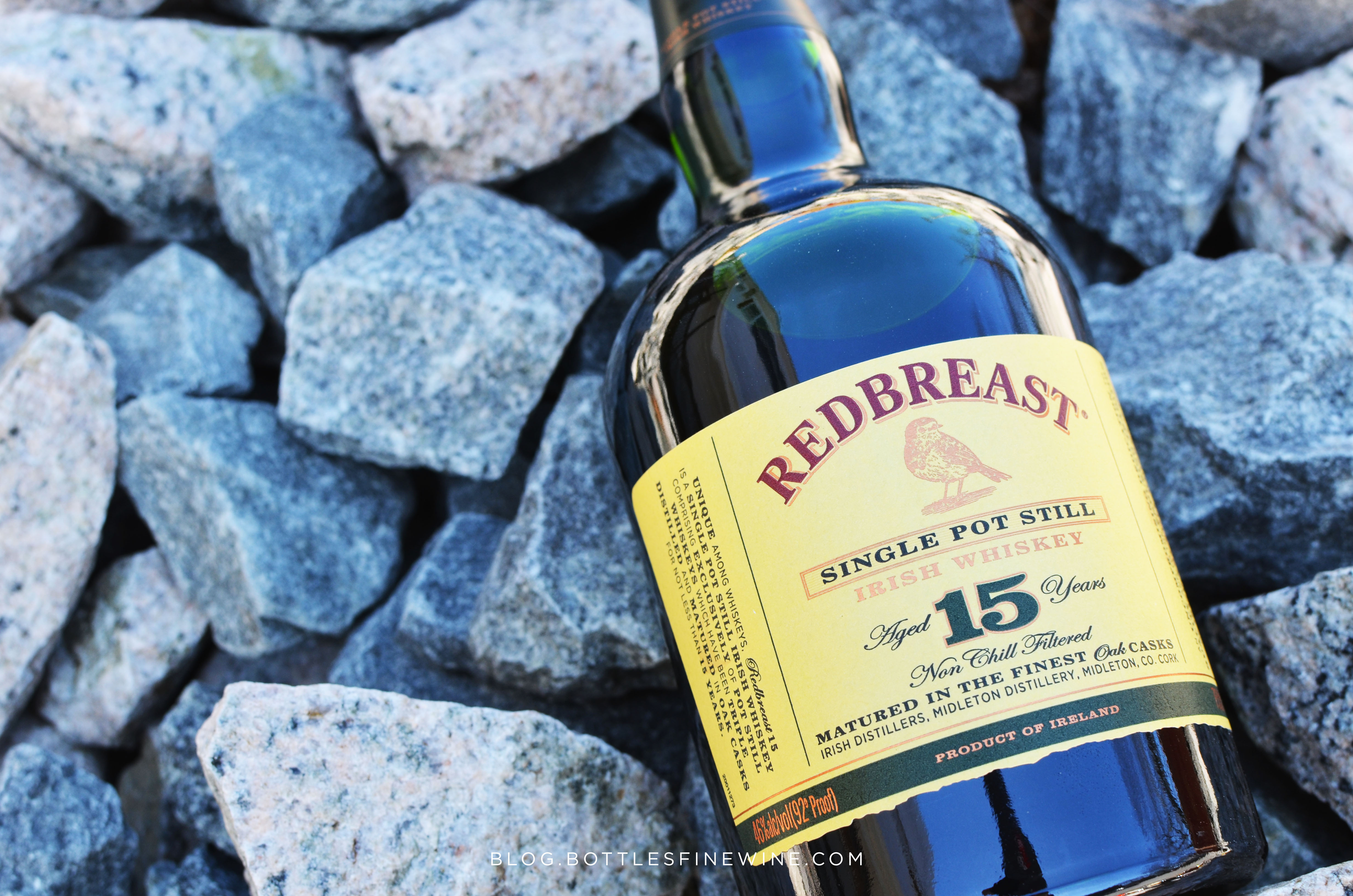 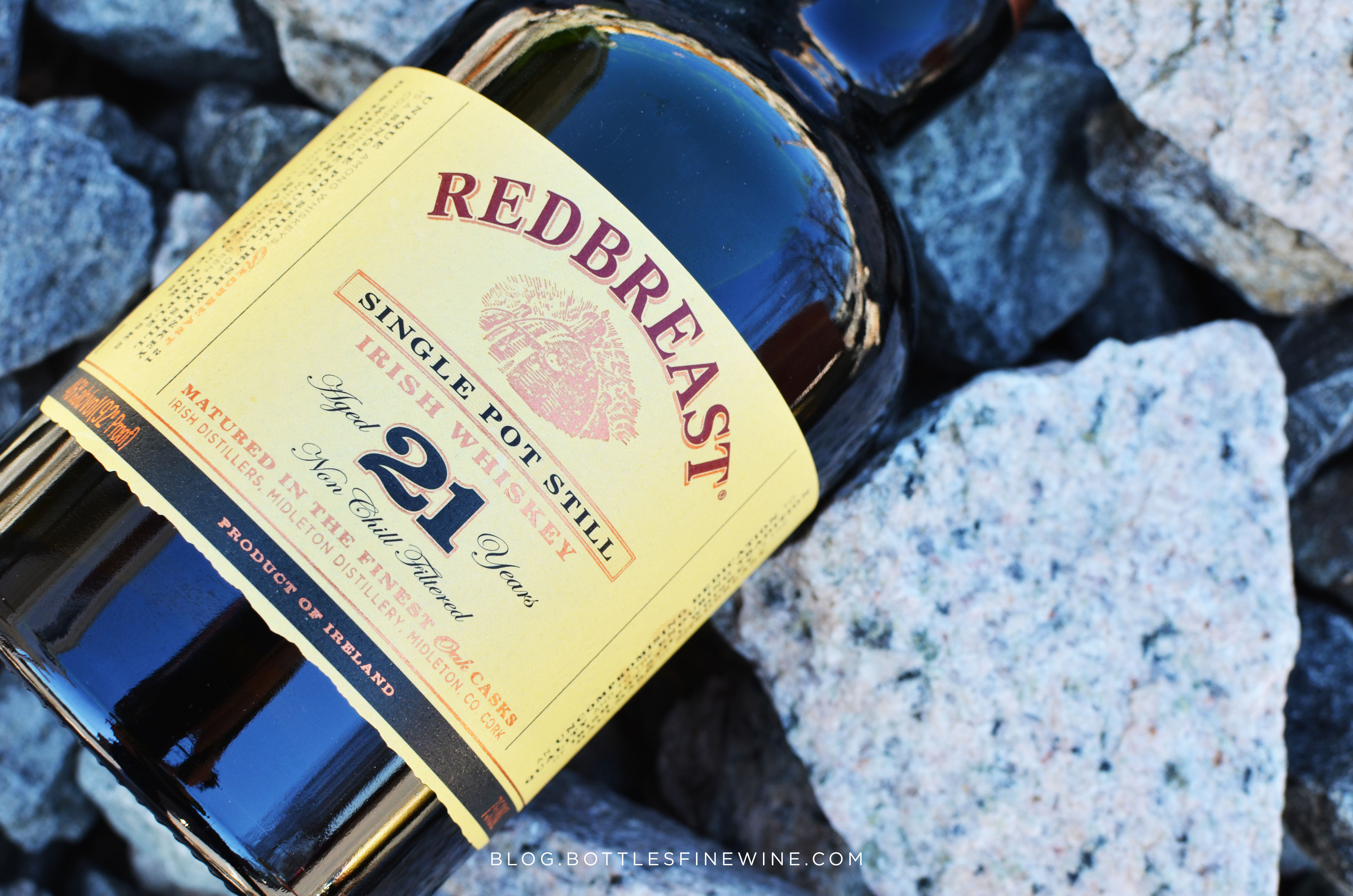 Redbreast 21-year
A beautiful example of the signature sherry style of whiskey with aromas of fresh, lush tropical fruits, and notes of vanilla, toasted oak and licorice. Flavors of luscious fruit round out the creamy mouthfeel. One of a kind.

Stay tuned. Next week we’ll reveal the three remaining whiskeys we think are among Ireland’s best.

This delicious recipe, reminiscent of the classic Irish Coffee drink, is the latest from Bottles’ in-house cocktail guru, Lily. It relies on iced coffee, rather than hot-from-the-pot joe, which means it’s not just for brunch or after dinner. The less conventional choices of butterscotch and sea salt combine to make a delightful iced Irish Coffee with a satisfying creamy texture. 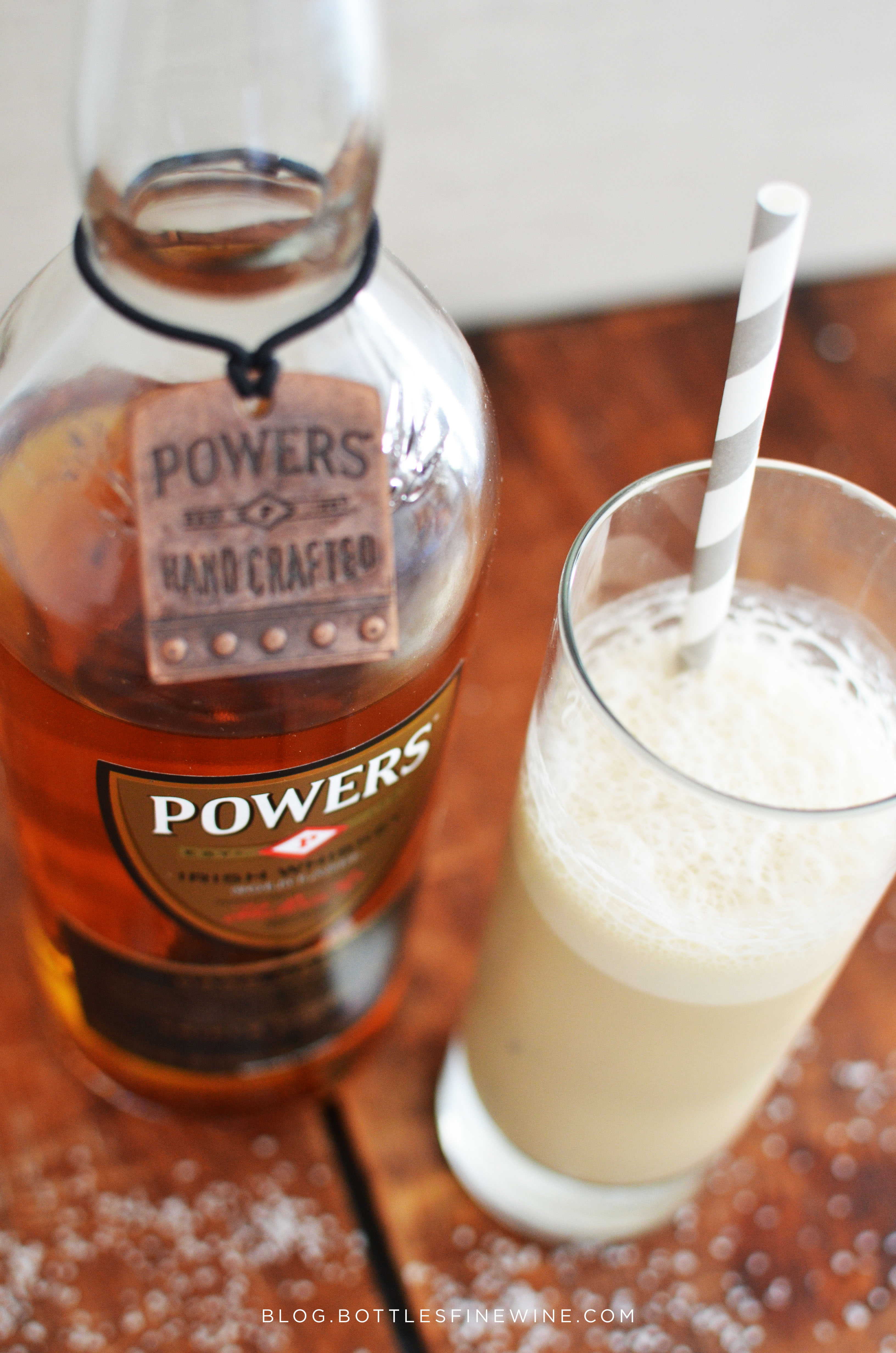 Add ingredients into shaker, and top with ice.
Shake until frost forms on the outside of the shaker.
Pour over ice into a highball, and spoon the remaining whipped cream froth atop the ice.
Garnish with a straw and add a few additional grains of salt over the top if desired.

Irish Whiskey is surging in popularity across the globe and no wonder, says us: we believe that a well-made Irish Whiskey is delicious, and stands on it’s own against the best Bourbons & Single Malts the world has to offer. 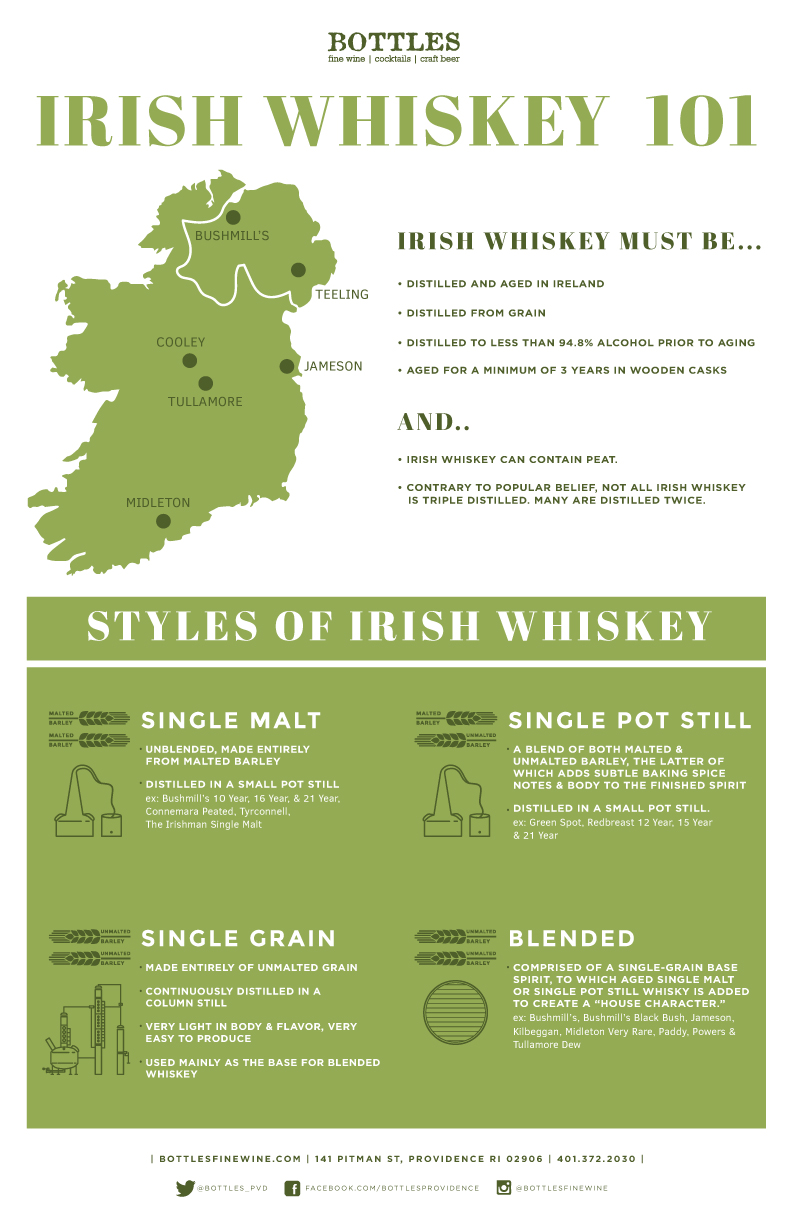 Irish Whiskey has been around forever. It’s a widely held belief (among all except the Scots), that it was the Irish who were most likely to have started distilling whiskey, as the Bushmill’s Distillery in Northern Ireland is the oldest licensed distillery in the world, dating back to 1608.

And since then, up until only the past few years, all of the Irish Whiskey available, no matter the brand name, came from one of only three distilleries on the island: Bushmill’s, Midleton, & Cooley. Today, to the joy of Irish Whiskey lovers everywhere, that number has expanded to 12, with nine new distilleries that have been built, or will soon be completed: Echlinville, Kilbeggan, Teeling, Glendalough, Tullamore, Alltech, Blackwater, Dingle, & West Cork.

Many today find it hard to believe that Irish Whiskey was once the hottest style of whiskey in the world, with a popularity that dwarfed other styles. In the early 20th century it began its decline, in two main waves:

1) The Easter Rising & the Irish War for Independence. As punishment, England levied trade embargoes on the Irish, which kept their whiskey from entering England, and therefore much of the rest of Europe.

At the start of this century, a resurgence in interest for Irish whiskey came about, presumably as a result of several factors including its price (Irish is usually cheaper that it’s Scottish counterparts), a resurgence in the popularity of Bourbon (which shares many similar flavor profiles), a market of curious consumers eager to try something “new,” and the wider availability of quality-made whiskeys from Ireland.

Here are our favorites:
–Power’s Gold Label
–Power’s John’s Lane (limited importation – get it when & if you can)
–Green Spot (if you can find it – extremely limited importation)
–Glendalough Triple Barrel
–Knappogue Castle 12 Year Single Malt
–Redbreast 15 Year