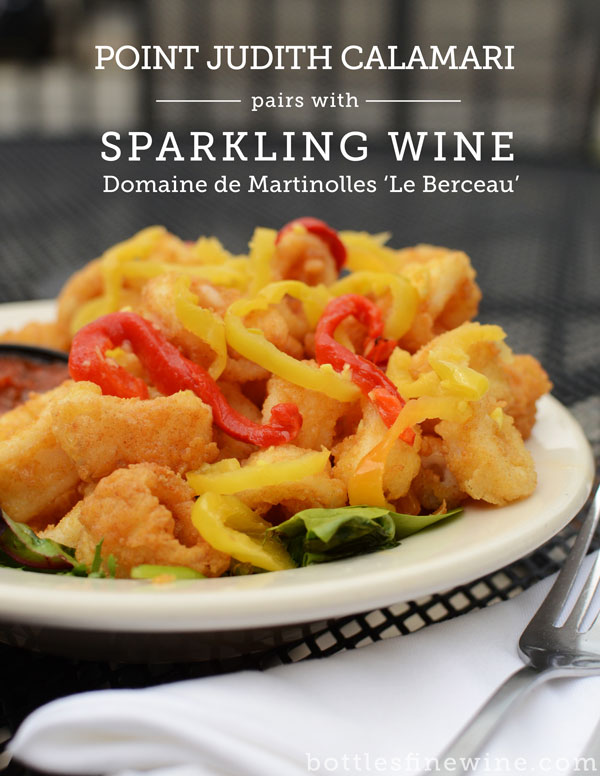 Who knew that Rhode Island is the squid capital of the world? Point Judith squid is not only important to the economy here (bringing in 7 million pounds a year!), but is also used in the most popular appetizer of the state, calamari. This spicy, fried, and uniquely Rhode Island dish deserves an equally flavorful, action-packed wine pairing: Domaine de Martinolles ‘Le Berceau’, a sparkling wine made in Languedoc, France.

In Season Now: Point Judith Calamari
While calamari is not yet the official state appetizer, there is talk of trying to make it the Rhode Island official appetizer. Here in little Rhody, calamari is typically served Sicilian-style, with banana peppers and marinara sauce, giving it that perfect mixture of crunchy, spicy, and sweet.

Wine Pairing
Domaine de Martinolles is located in the Lioux wine region, which is the western most part of Languedoc, France, and is known for Mediterranean weather of both hot and dry conditions. This sparkling wine is made from the traditional Mauzac grape found in this region. The grape is picked later in the season, so wines made from it typically display flavors of green apple, with good acidity. The refreshing acidity, dryness and sweet flavors of fruit are a perfect pairing with the spicy calamari, while the wine’s crispness will cut any greasiness.

Recommended Wine: Domaine de Martinolles ‘Le Berceau’
– Deliciously dry and crisp, with notes of green apple, pear, yeast, & some vanilla, giving it great depth of flavor.
-‘Le Berceau’ is made from the Mauzac grape, traditional to the Lioux region, and is produced in the traditional champagne method.
– ‘Le Berceau’ translates to cradle, a reference to the birthplace of sparkling wine.
– The Vergnes family has owned Domaine de Martinolles since 1926.

Visit our store to get this wine