Everything old is new again. We’ve seen this cliché played out time & again in our shop, as people ‘rediscover’ Chablis or Merlot, to give a couple of examples.

Yet, as clichéd as it may be, the sentiment rings truer than ever for a beer style that has taken our store by storm: Gose.

Gose (Germans say “GOHZ-uh”. “GOHZ” is what we hear in these parts) is a very unusual, ancient style which originated in the north of Germany, in Leipzig. It’s an unfiltered wheat beer, which makes it cloudy & refreshing, very much like a Bavarian Hefeweizen. Where it differs is in the unusual additions of coriander, lactic acid, and sea salt.

When made correctly, a Gose has a fruity/salty/tart balance that is unlike anything else in the beer world. Tart but not mouth-puckering, fruity but not cloying or sweet, and salty like well-seasoned food. The components are all there, but they are in balance, and your tongue has fun trying to pick out what flavor is coming next.

Why is it becoming so popular?

We think it’s a response to the IPA craze. IPAs are great beers, full of piney, resinous hop flavors, but one can only have so many before palate fatigue sets in. Brewers have responded by creating ‘session IPAs’ with a lighter ABV and muted hop presence, but they often taste like a watered down IPA, and are not as satisfying. Gose, however, at an average ABV of around 4%, offers flavor and nuance without the heaviness and hoppy punch of an IPA.

Like any tart beverage, this beer is made for food, and pairs especially well with summertime fare like fish, grilled sausages & pork chops, potato salad, and barbecue. Much like wine (which is an acid, and Gose features lactic acid in the mix), a Gose will also pair well with cheese. Everything from a fresh, young Chevre to a knobby, rustic aged cheddar will work, and a blue cheese will highlight the salty qualities. Intensely refreshing, a Gose is also a welcome lawnmower beer on a hot July Saturday.

Now, there’s been a lot of talk lately about sour beers, and while Gose falls under that general distinction, it isn’t nearly as punishing as many of the wild fermented, funky, sour beers out there. Do not confuse this style with a ‘Gueuze’! Beer nerds the country over love to pluck out the not-so-subtle notes of horse blanket, cat pee, and musty basement in their Belgian Gueuze, and while there’s certainly a place for that (even Zamfir has his fans), it’s not what most people are looking for in a beer.

What we’re talking about is a delicate beer with subtle flavors of wheat, salt, coriander, & acid. Imagine those same flavors in a perfectly baked sourdough loaf and you’ll have the general idea.

Here are some of our favorite Gose beers for the summer season. We hope you’re intrigued to find out more and give them a try next time you fire up the grill or lawnmower. 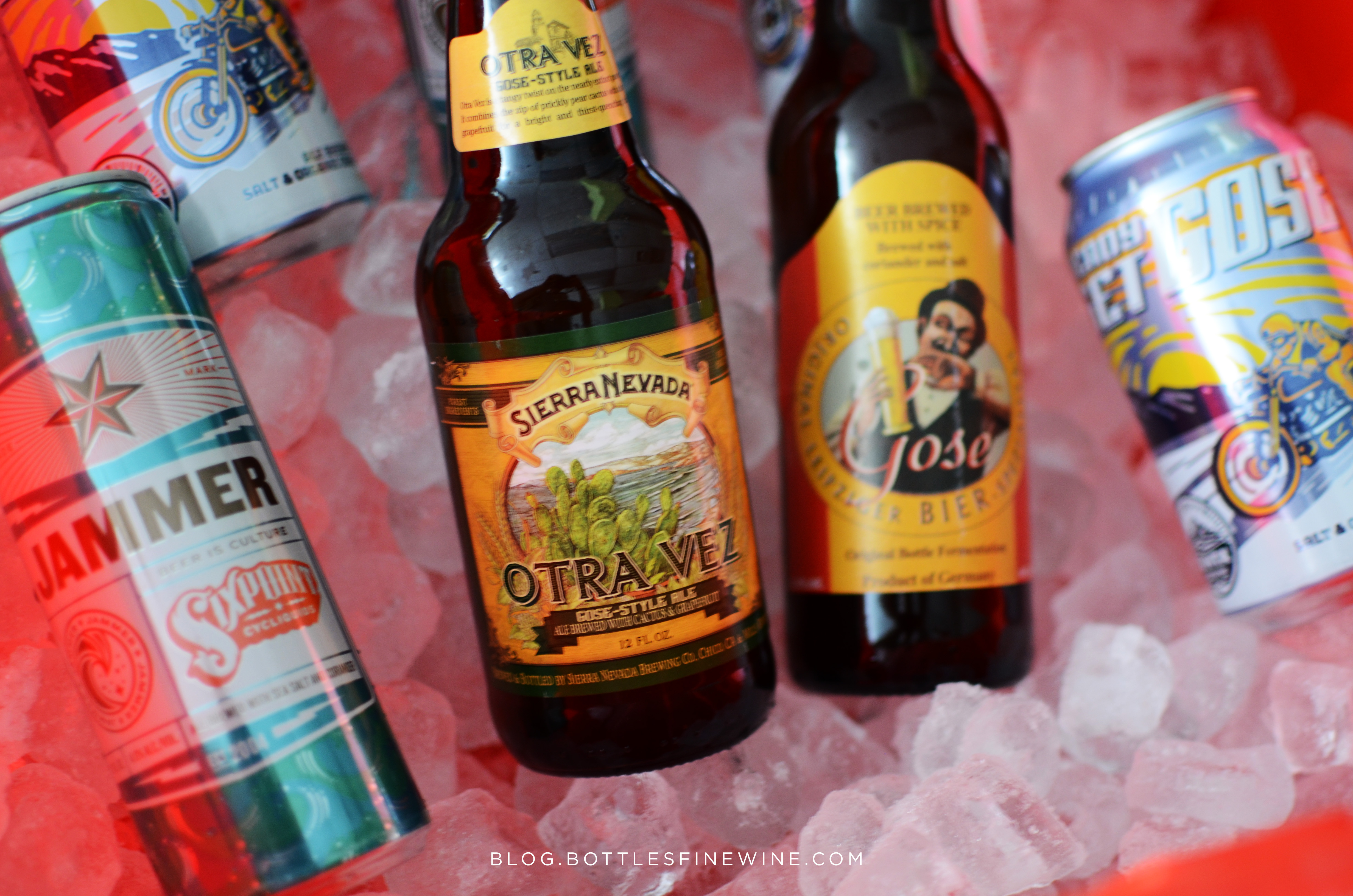 Sierra Nevada Otra Vez – Bucking tradition, Otra Vez is sweetened with prickly pear cactus & ‘tartened’ with grapefruit. The fruitiest of the new Gose beers, it’s the perfect ‘gateway Gose’ as an introduction to the style.

Uinta Ready, Set, Gose! – Mildy tart, this Gose is made in a more traditional method than the Otra Vez, and has more tart flavors with less fruitiness.

Sixpoint Jammer – Our favorite entry isn’t afraid of the salt. A healthy dose of Jacobsen’s Sea Salt brings balance to this funky can. You’ll go through a six pack before you know it!

Gosebrauerei Bayrischer Bahnhof Leipziger Gose – For a treat, go straight to the source. Re-vamped and re-opened in 1999, this brewery specializes in the Leipzig treat. We have it imported fresh as often as possible.